O boy! Did we have fun this week!  The Starter League organized Builders Weekend, a weekend hackathon.  A hackathon is really an event where a bunch of people come together to try and create some sort of product, usually software or web based app, in teams in a pre-defined time period.

This gives you a change to learn and stretch yourself, by working with other people on a tight deadline to create a completed product.  So on Friday night we started around 18:00. Everybody had a chance to pitch an idea, once all the ideas were presented, we could vote for our two favourite ideas. 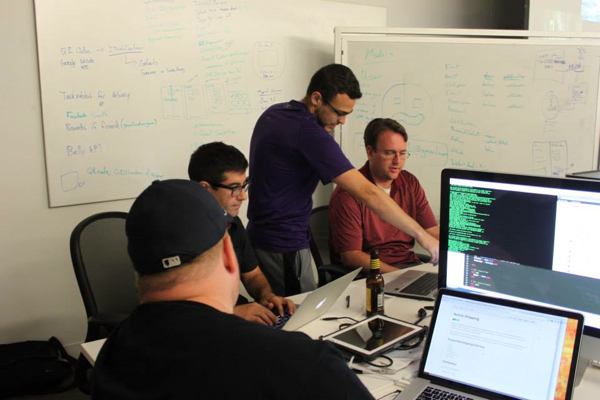 The 4 ideas with the most votes were built.  I joined a team building iLost&Found.  iLost&Found is an online service that connects your contact details to a qrcode.  You can have try it here: iLost&Found.

We had until Sunday 1400 to work on the app.  Each team then had the chance to present their app to everybody including a panel of judges, who would pick a winning team. 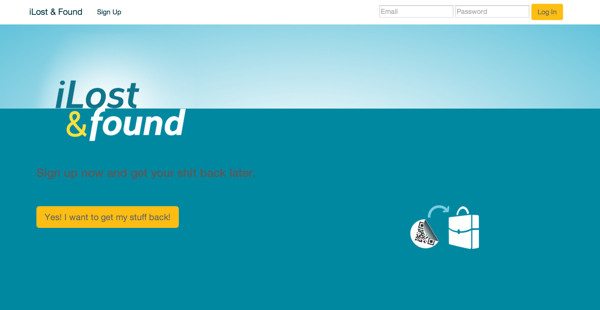 Home page for iLostandFound – Our app from Builders Weekend

It was great fun. I even managed to work through the night Saturday and only got to bed Sunday morning around 0800.  Something I have not done in a while.  We learned a bunch of great lessons this weekend. Here are my three takeaways:

1)   Working on code other people wrote is much harder than building the whole app on your own.  It gave me a new appreciation for writing comments and making sure the code is easy to read.

2)   Managing a code base with multiple contributors is tricky. We did not know enough about using github to make this easier so ended up spending loads of time redoing code that was ‘lost’.

3)   Scoping is VERY important.  Seems like you almost always try and do more than what is possible with the time and resources at your disposal.  But since in event like this those are fixed, the only thing left to adjust is how much you can achieve. 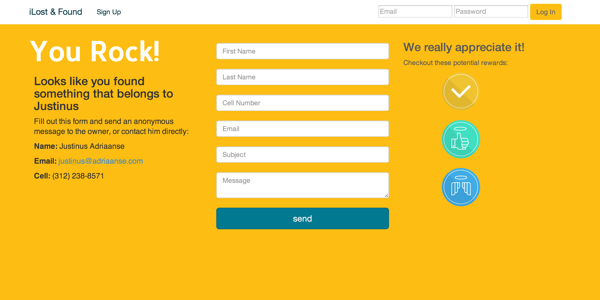 The page you will see after scanning a qrcode from iLostandFound 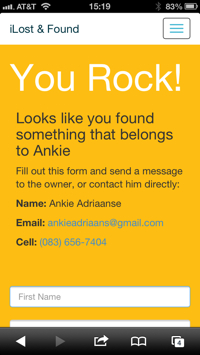 All four teams did really well and progressed nicely with building apps.  All the presentations were awesome.  It is actually amazing to see the skills we’ve all learnt over the last 8 weeks being applied, to build working apps in only a weekend.

It was great spending the weekend learning and working in a team, as an added bonus the iLost&Found team was declared the winners.  I look forward to doing something like this again.