I’m not sure where the turning point was, but boy I’m glad it turned!

Justinus has been a busy bee since I’ve known him, always two or three things to do at any one time.  I think he is just too intelligent; he can’t help himself, maybe a bit hyperactive too!  Ask him anything about almost everything, especially sport stats;  his knowledge really baffles me sometimes.  He is a man with a plan, always optimistic and doing whatever it takes to make a success; that fact instantly attracted me to him when we first met.  So, I guess it shouldn’t have surprised me when he got to travel a lot, mostly for work and studies; there was a lot to be done! 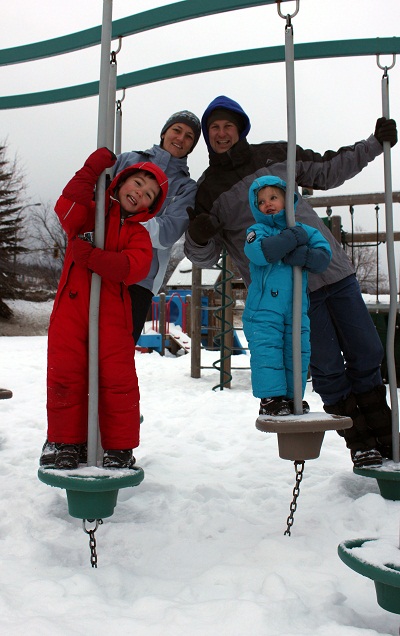 Having fun in Rotary Park in Fernie, BC, Canada

We were married almost 10 years, when I fell pregnant with our first child.  We were living in Pretoria then, and decided to move closer to Durban, where Justinus spent about 70% of his time (the rest were spent on MBA).  We moved our house content in the 8th month of my pregnancy and if it weren’t for Maria Thonga’s help, we would’ve struggled indeed!  Christopher was born in December 2008, and luckily the birth was over the holidays, so we got to spend a great deal of time together.  At 2 weeks old, we took the journey to Umdloti with my parents.  My dad drove 1630km in 3 consecutive days, to make the round trip.  At 27 days, after frustrating troubleshooting and receiving well intentioned advice, Christopher was eventually diagnosed with pyloric stenosis.  He had to get a laparoscopic operation to open up the narrowing between his stomach and the small intestine.  Justinus was at MBA classes in Johannesburg, and if it weren’t for my mother, persistent not to leave our side even on the sister’s demand, I don’t know how I would’ve made it through the ordeal.

Living in Umdloti was very lonely for me; though it was a very special time with Christopher.  Fortunately when Justinus went to Johannesburg for MBA, his folks made an effort visiting me or I went with to Pretoria.  After 6 months we moved back to Pretoria.  Travelling locally and internationally continued, but we had a better support system in Pretoria, and I got a job with an incredible boss.

I fell pregnant with our second child and Sarika was born in October 2010.  We moved January 2011 and went on a skiing holiday in February.  Sarika was only 4 months old!  Justinus knew that if he would’ve asked for my opinion I’d said no, thus it was a birthday surprise!  We thoroughly enjoyed the holiday while the kids stayed with our parents.  .Justinus flew more than 100 times in 2011, he missed us a lot and missed out on the kids.

In January 2012, we went for a drive and Justinus told me of his new plan.  He was thinking of leaving the company that he had helped to expand through hard work and sacrifice for the past 11 years. He did a great job in developing the company, and I am very proud of him.  It seemed that he was weighing up the effort of working so hard and missing out on family life.  We knew that all the hard work was a sacrifice for the family, but it seemed that he was wondering if this sacrifice was worth it.

Early March 2012 was the end of an era.  Justinus was home, spending lots of time with us, started exercising, losing weight, eating healthier etc.  We are loving it!  And now, 2013?  We are spending the ski season in Fernie, Canada!  What a story the kids will tell?!  My dad taught me how to ski when I was 2 and 4 respectively!  He is part of my life and chose to tell a better story at the end of his!  I thank grandparents for their love and support, God for His grace and that He created man with a free will to choose!  I am so glad about the choices Justinus has made and know that he will make a success of anything he touches in the years to come.

When is the next turning point?