Getting connected to the Internet proved to be a much bigger challenge than I expected. The plan was to get a SIM card in Calgary to be able to SMS (text as they call it here), do voice calls but most importantly be able to connect to the Internet. We agreed with the owner of the property we are renting to take over their cable TV and Internet subscription for the time we are in Fernie. So I expected to get there and start using the web at blistering speeds.

Things didn’t turn out that way. The first challenge in getting connected was with the 3G connection on my iPhone. When I purchased the SIM card in Calgary, I added what they call features to my prepaid account. Features are basically 30-day bundles you buy on prepaid to make it cheaper. I added a bundle for unlimited text, receiving calls (which you pay for otherwise) and unlimited voice calls after hours. I then also added a 1 GB of data on top of that.  The total for these two features was $70.

Thinking that the 1 GB of data would be more than enough I used my phone to navigate in Calgary. That evening while suffering from jetlag I tried to log into my TELUS Mobility online account. After resetting the password about 3 times I noticed that their site is “best viewed in IE or Firefox” and I was using Safari on my Macbook. When I finally got into the account, I realised that the features was not loaded and that I had used up all of the $100 in credit that I had loaded for only a few hundreds MB of data.

The next morning we returned to the TELUS store and after a call to the call centre they corrected it. Apparently it is a known and common issue when add features while activating new prepaid accounts. Clearly pre-paid is such a small part of the market here that they don’t bother fixing a known issue. 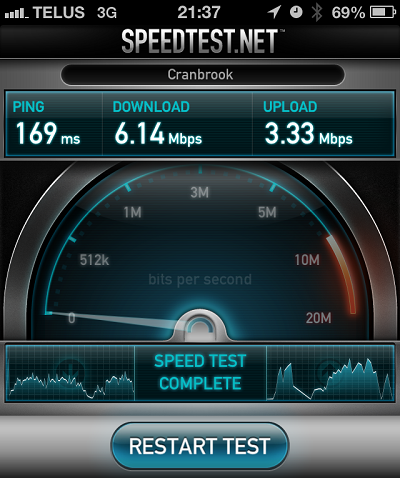 Getting Connected – The 3G speed at the house in Fernie

After all that the first part of getting connected was successful. When we arrived in Fernie, the owner of the house had left a folder with a bunch of information for us. Included were the wifi network name and password for us to use. The only problem was that I was not picking up the network.

There were a few others that seem to be available through out the house but the password didn’t work on them. The modem was in a one room in the house the owner had locked with all their personal belongings in there. I contacted the rental agency and after the delay in them chatting to the owners they send me the same information as in the folder again. They must have thought I was an idiot for not being able to connect to the network.

I later convinced them that there must be another problem, so the owner suggested to go to a computer store in town and renting another modem to set things up. They offered to pay for the rental. The store however did not stock cable Internet modems and they said that Shaw (the provider) would not allow two modems in the same house either.

So the obvious next step was to try and get into the room to see if there is a problem with the modem. However the rental agency didn’t have a key. So the locksmith came out to the house and tried to pick the lock but was unsuccessful. He then had the idea that if the owners could give him the number on the key he could try and make one. After a bit of a delay (the rental agency was having their xmas party that afternoon) we got the key number. The locksmith went back made and key and then returned to give it a try. But we had no luck with the key either. The next step was to drill the lock open, but he had to get permission from the owner first. By this time it was too late so we had to wait another day.

The next day he returned and took about 30 min to drill the lock open. When we got into the room the modem was unplugged. I plugged it in, and it all worked perfectly, although a little temperamental at times. 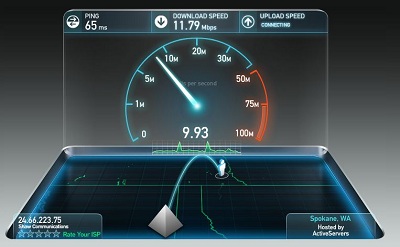 Getting Connected – The line is nice and fast!

Never thought getting connected here in Fernie would be such a mission…but now that we are, we love it! It is nice and fast and we stream video like a dream.