Review of: The Founder's Dilemmas: Anticipating and Avoiding the Pitfalls That Can Sink a Startup

When starting a business the founders make key decision early on that they will have to live with forever. The Founder’s Dilemmas offers great guidance. 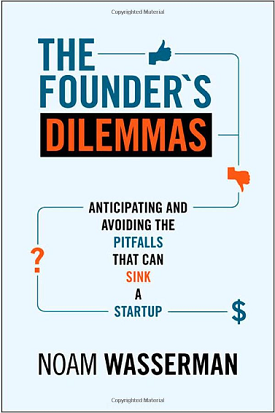 A few years ago I read an article in the Harvard Business Review that asked: Do you want to be rich or king?  After reading that article I thought my answer to the question is obvious and that I would rather be rich than king of the castle.  So when Amazon recommended The Founder’s Dilemmas, I was immediately intrigued to read the book.

The author Noam Wasserman is a professor at Harvard Business School.  Although The Founder’s Dilemmas reads a little like an academic article, I found it fascinating.  The data used as basis for this book was gather by Wasserman over more than a decade. It included more than 10 000 founders, in the technology and life science industries.

The Founder’s Dilemmas analyzed many of the reasons that people tend to start businesses. Although there are many, the primary motivators are either wealth or control.  Wasserman the goes into great detail into many of the decisions that founders make through out the life of the business that they start.

Some of the most critical decision included: Founding on your own or as a team, taking investment or bootstrapping, when to replace a founder CEO, hiring people.  For example control motivated founder will tend to: remain solo founders, hire inexperienced people and keep control of decisions, self fund, and choose to remain CEO through all stages of the business development.

I found this central theme very insightful, and it really helped me understand my own motivation better. I have no doubt that it will help me make better and more consistent decision when I start my next business.

I also loved the real live examples of founders and the decision they made. One of the case studies were Evan Williams, through founding and selling blogger and then founding Odeo which eventually led to starting Twitter.  Interestingly another case study was Feedburner, who was founded by Dick Costolo (among others) whom later become CEO of Twitter when Evan Williams stepped down.

When starting a business the founders make key decision very early on that they will have to live with for the life of the business, The Founder’s Dilemmas offers great guidance to make sure you make informed decisions.  It will also force you to properly examine your own motivations.

What are your motivations and how have they effected key decisions when you started a business?